Search
Menu
Categories
About Us

Welcome to our website. The Matouwac Research Center (UN-registered Non-Governmental Organization (NGO), 501(c)3 not-for-Profit organization) is a historical research and native advocacy center. The Matouwac Research Center is formed to gather information, exchange ideas and gain new perspectives pertaining to the Indigenous history of Long Island. It is our belief that native history cannot be examined solely through a colonist’s lens. Therefore, we will strive to incorporate Indigenous practices and methods as we conduct our historical and archaeological research.

The Matouwac Research Center’s mission is to research Long Island Indigenous history from an alternate perspective, paying particular attention to its influence on the lives of current indigenous residents. The Matouwac Research Center will explore areas such as indigenous rights, sovereignty, territory and self-determination through a concentrated effort to investigate, document, collaborate and disseminate information with a focus on Long Island indigenous interests. We will implement an Indigenous Empowerment program (IEP) that presents to Long Island Native Americans new perspectives on Long Island Indigenous history, discusses the current status and the personal lifestyles of the region’s indigenous population – paying particular attention to how these factors influence the behavior and aspirations of local indigenous residents. As a primarily on-line interactive resource, the IEP will benefit LI indigenous participants by recommending specific actions, identifying available resources and offering feedback that is timely, thoughtful, and appropriate to their specific needs. 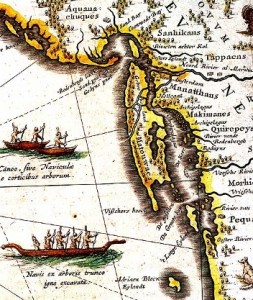 We decided to use the name Matouwac Research Center because Johannes De Laet, one of the founders of the Dutch West Indies Company, published De Novis Orbis (see attached image) in 1624, which refers to the aboriginals inhabiting the eastern end of Long island. His book was published only four years after the establishment of the Plymouth colony in Massachusetts and fifteen tears before Lion Gardiner set foot on Long Island. De Laet refers to the “savages” who inhabited a great cape 12 miles west of Block Island as the Matouwacks. He identifies their land as Fishers Hook or Cape de Baye, whose modern name is Montauk Point.

Some historians refer to a Matouwac or Metoac Confederacy (changed in later books to Montauk Confederacy). In our opinion, the concept of a confederacy of “tribes” on Long Island formed to defend themselves against the “fierce” mainland tribes is of colonial origin. From a native perspective, we believe that a single nation occupied the Eastern Long Island territory – and they had nothing to fear from other nations until the European conquerors arrived and destroyed the balance of power that served the Algonkians of the North-east for thousands of years. For research purposes we will call this Long Island native nation, Matouwac 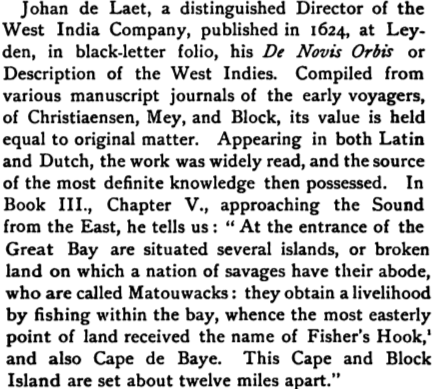